The new form of hypocrisy

So I was in my local supermarket when I saw this week’s copy of The Spectator magazine. Imagine my surprise when I see myself on the cover! Or, at least, a grotesque picture of what some poor misguided artist thinks I should look like. 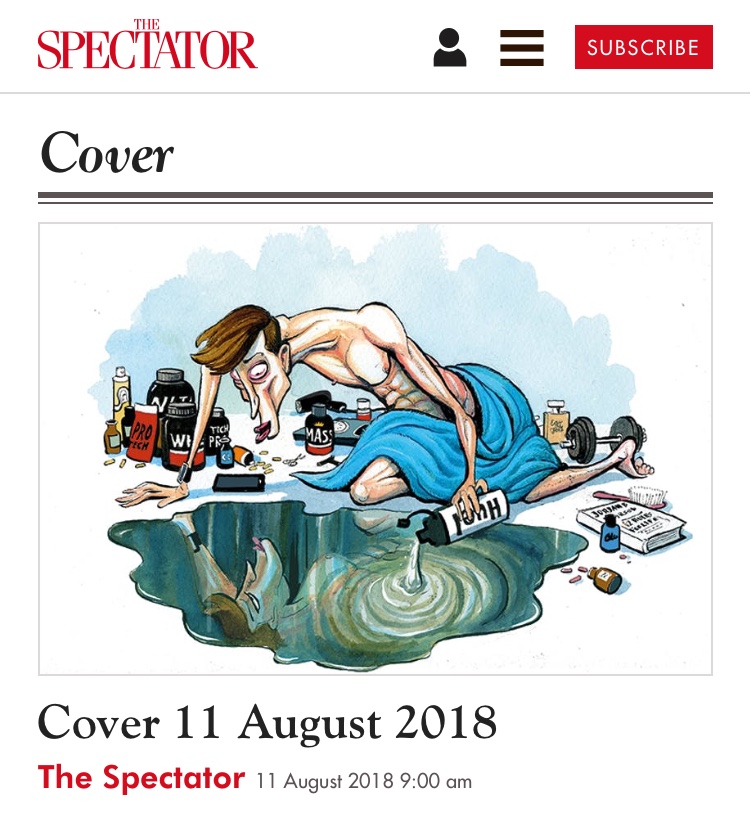 For those who can’t see the picture for some reason, it shows a gaunt young man with well groomed hair surrounded by a smorgasbord of supplements and cosmetics. He is covered by a towel around his waist revealing an extremely thin body with wiry muscles, and is fixated with his reflection in a murky puddle in front of him. Into this puddle he pours the contents of a Huel brand shaker bottle.

So as the title of the post alludes I think the article is pretty disingenuous and full of contradictions, but journalistic integrity seems to be a thing of the past and I won’t lament it here. I just wanted to share this article with this lovely, diverse group of wonderful people, because it struck me as funny that The Spectator thinks we’re all vanity-stricken, pill-popping, self-absorbed 20-something white males whose gym budgets are only exceeded by the fortunes we fritter in the local salon.

At least they say there’s no such thing as bad press?

I’d love to slap the writer.

Sadly some of it is true, but how is it bad when looked at within context, how is looking after oneself not a good thing?

It’s like anything, too much is bad, if it’s neurotic, but so what if our generation wants to improve ourselves, to me it sounds like the jealousy of those who can’t commit to Self improvement!

I’ve lived both lifestyles tbh, when I was in my teens I was over weight, wasn’t interested in myself, diet was poor, health was poor, I was depressed - so my mental health was also poor, I smoked, drunk, all that crap, and then late teens/early 20’s it changed, I got into fitness, I don’t drink, I don’t smoke (vape CBD though ;)), I eat like a monk, I practice mindfulness & meditate daily, I look after myself, and other wise lead a productive and decent life. I know which lifestyle I’d rather continue living.

I don’t see how being a teetotaler or a health freak is any less masculine, I can still go out, heck I was best man on a stag do, didn’t touch a drop of alcohol, I probably spent more on strippers that night than drinks… Jeez. My point is it didn’t stop me doing any of the “normal” crap “guys” do, not that it’s even relevant to masculinity anyway.

C&P from the dictionary.

"handsome, muscled, and driven, he’s a prime example of masculinity"

I’d say the definition of masculinity aligns with the likes of us Huel guzzling young guys far more than the article makes out.

Haha triggered indeed! Did we just find the tinder date from the first paragraph?

What blew my mind was the author saying this self-consciousness is influenced by a desire to disassociate oneself with the toxic behaviour of the likes of Weinstein, and then goes on to make out likes it’s somehow a bad thing? Amazing.

Whoa where’d you find such a perfect description of me?

Silly article, full of ignorance about pretty much everything! Par for the course with the spectator…

It appears to be a response to this article.

Deleting tech’s toxic culture will be hard but it needn’t be.

These psychopathologies are nothing more than slurs these days. Words used by people to shame others for doing things they don’t like and to give their bigotry a veneer of legitimacy. These are the real toxic people.