Just the other day was my first experience with Huel. I bought 2 cinnamon roll black edition, 1 vanilla v3.0, and 1 chocolate v3.0.

My thoughts:
Drinks are not very good. I am shocked that people actually like them. My daughters opinion is they are

I’ll do what I can to finish the remaining 13 pounds.
In my 52 years I have used a lot of different protein drinks and these are up there with the worse tasting of them all.

I received 2 of the new shakers with these orders.
Wondering why the shakers are not wider so you can fit your hand down in it to clean it with a sponge. I don’t have big hands at all being 5’ 8” 140 pounds.
The cap isn’t attached ?

And the bags are a pita to close. One of them won’t seal

Not trying to be a downer but this has not been a good experience at all.

It’s an acquired taste for sure but I quite like them now. People usually say the 3.0 powder is better than the black bags. Try ordering some flavour enhancers for your vanilla bag, or try your own like cocoa powder, a shot of coffee, or some peanut butter (may have to use a blender for the last one).

I agree with the shaker diameter thing although its easily overcome with a brush/sponge on a stick device. If it was much wider it’d be hard to handle for some people I imagine. I don’t even use a sponge half the time, just add a drop of washing up liquid and warm water immediately after drinking, seal it up, and shake, and it comes nice and clean. The cap was attached on the old version but it used to drip liquid onto your face as you drank, so swings and roundabouts!

If the bags don’t seal, take a toothpick and fork and clean the powder out of the zip. Again it’s annoying but easily overcome.

But if all those fail, then fair enough! It’s definitely not for everyone, and at least you tried!

Drinks are not very good. I am shocked that people actually like them.

It can take time to get used to the taste but it’s worth it in my opinion. Try using a bit of oat milk with water- maybe 50/50. And leave it in the fridge overnight before drinking it for breakfast. It’s much nicer after it’s been in the fridge for a few hours.

As for cleaning the shaker, just add a bit of warm water and washing up liquid and shake it, no need for anything more complicated.

Herbivore,
Thanks for the reply.
I like to stick with water since oat, almond, and coconut milk adds anywhere from 120-200 grams of sodium. Huel powders already have an excessive amount of sodium in them.
I tried leaving it overnight in the fridge and it tasted exactly the same.
I just picked up a BlenderBottle shaker in 32 ounce for $12. Works great. Cap is attached. Plenty large diameter. And I can fit 500ml of liquid, 100 grams of powder, and 5-6 ice cubes in it.

I like to stick with water since oat, almond, and coconut milk adds anywhere from 120-200 grams of sodium

Huel powders already have an excessive amount of sodium in them.

Epicure,
Just checked 2 different brands I have in my fridge. For one cup (240ml) one brand has 120 mg of sodium and the other 190. I’m in the US and all of the non dairy milks in my area have over 100mg of sodium per cup.
And yes 350-400mg of sodium that huel contains for a 17 ounce drink is excessive

It’s designed as a meal replacement so it has an equivalent sodium of a meal.

That is quite low for a meal. Think of huel as food not a drink, it is a complete meal not a drink or snack.

Thanks for the replies everyone. I’ve decided to choke down the rest of the huel and move on to a product that better suits me - Redcon1 MRE
I’m in southern CA if anyone wants a deal on what I have remaining. One unopened bag of cinnamon roll black and another one with 14 servings left. Also 14 servings left of v3.0 chocolate and vanilla

Epicure,
Yeah sorry my bad for typing grams instead of mg.
100+ grams of sodium would be off the charts

I guessed something was awry.

Hey if you want to boost your remaining Huel try a pinch of spirulina. I tried it for the extra nutrients but it really tastes good too.

Hey Argon, welcome to the forum, but I’m gutted to hear you’re stopping your Huel journey so soon. What have you tried so far. Use Huel as a base and experiment. There are so many things you can do to adapt the flavour and texture!

There is a video here (please excuse my sub-par performance) 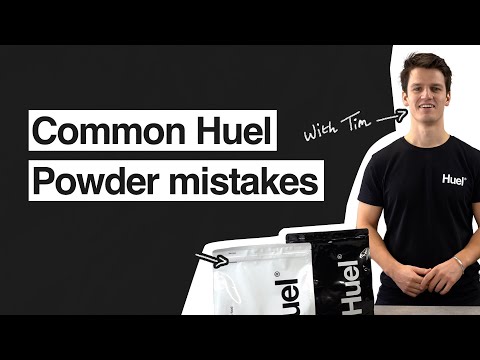 Or you can scroll down on this article to ‘Powder Hacks’

How to Use Huel

New to Huel? Wondering how to use it? We've put together a handy guide containing everything you need to know when using Huel for the first time. Read on and find out how to make your perfect Huel.

Wondering why the shakers are not wider so you can fit your hand down in it to clean it with a sponge.

Good question and one we considered a lot. @Smep is on the right track, there were loads of reasons and different perspectives on it though. I posted our reasoning here, 2nd half of post! If you are interested!

WE HAVE MADE OUR OWN SHAKER!

Loving this conversation and feedback! If you will indulge me (I feel like some of you will be interested in this, please skim past if this is dullzville) We actually tried this first before our current lip. 2 problems: Softer, larger spout makes the spout feel HUGE. So strange because the aperture of the one below was the same as our RTD bottle, but it had a smooth feel. The result was that it just felt really strange and big. We had most people in the office vote on it and we decided that…

Yup, we didn’t like the designs with the cap attached while maintaining the asymmetrical design we loved so much. It generally involved using a tether and we didn’t like the drinking experience. Our old buchsteiner had similar tethered lid and the result was having to awkwardly bend it backwards or suffer a forehead or shoulder of dripping Huel. A removable lid was much simpler experience and looking at the success of Chilly’s bottles and similar we didn’t feel it a problem. We committed to producing spares just in case people lost the cap, but a bit of a straw poll of Chilly’s bottle users around the office seems none of them had ever misplaced their lids.

I would contest this since I do it most days! You can just push down the grid on top, or try with just 3 cubes if your cubes are large, your Huel will still be ice cold!

Hope some of that is helpful and that you can make the most of the nutritious Huel still in your cupboard!

What I really dig about the cap is the thick rubber loop attached, so the cap can be looped on a finger whilst holding the bottle. Cleaning a bottle with a flip-cap is more of a hassle too, it’s easier to have it separate.

That’s right, I use the loop to hang it on the coat hook when I’m drinking Huel in a public toilet.*

*of course I don’t do that, but a few years ago a guy who worked that used to eat his sandwiches in the toilet. I’ve no idea why. Annoyingly he had the same surname as me and I hoped some people didn’t just assume we were related. I am far more handsome, intelligent and the only weird habit I have is drinking sludge out of plastic bottles. At least that’s what some of my coworkers thought when I first started drinking Huel at work. Funnily enough some of them became converts.

I was converted to Huel by my cat. I began thinking if he can get 100% balanced and complete nutrition in one easy package… why can’t I?

Tim,
Thanks for the info. I’ve tried all 3 of the flavors I bought. The most tolerable for me was 50/50 of the cinnamon roll black and vanilla v3.0.
My wife is going to try some today so maybe she will like it.
Funny thing is I have tried lots of plant based protein type drinks and I have not liked any of them. On the other hand I have tried tons of whey based protein drinks throughout the years and I don’t think there is any that I didn’t like.
I guess I’m just a meatetarian

No worries at all, we all have our preferences. I totally understand what you mean, vegan protein and whey protein taste very different. I think it’s something you get used to, I now don’t like whey, think it tastes really weird.

) but I just discovered a small banana and some ice chucked in is even better. To be fair I couldn’t imagine just shaking it unless is was an emergency.